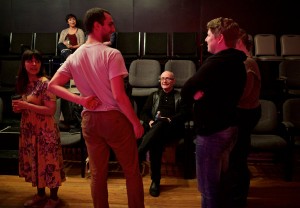 A great article about Mac Wellman recently appeared in The New York Times!

New York theater space JACK is devoting a season to graduates of the Play Writing Program at Brooklyn College, where Wellman has taught for decades.

Alexis Soloski’s wonderful article, as it spotlights the space, gives a lot of wonderful information about Wellman’s life and career, which includes over 80 plays and many awards, including three Obies, the third for Lifetime Achievement.

The piece focuses on Wellman’s integral relationship with his students, among them Erin Courtney (with whom he directs Brooklyn College’s Play Writing Program), Young Jean Lee, Tina Satter, and Sibyl Kempson. Above all, he encourages his students to be courageous; among his most famous exercises is writing a play in a language one barely knows.

It also describes Wellman’s start in playwriting: while he was hitching a ride with a Dutch playwright during a junior year abroad in the Netherlands, the playwright suggested that Wellman (primarily a poet at that time) try writing plays. Wellman’s first plays were for Dutch radio.

Solid Objects published Wellman’s Left Glove in 2011, and we are thrilled to announce that we will be publishing his book-length poem Sparrows Three in 2016!

This is a widget ready area. Add some and they will appear here.